Note- if you came here due to a search, I have put some Airstream resources at the bottom of this page, here 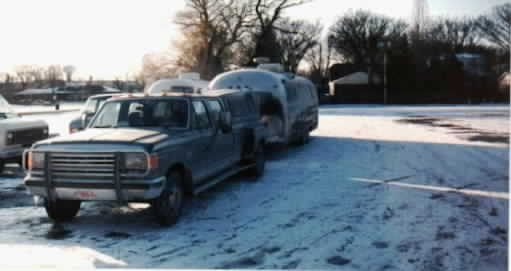 Chicago, Illinois- November, 1988(?) The morning after driving in from Grand Rapids, Michigan in a blinding snow storm.
This is the last of seven trucks we used to pull this trailer. At this point the truck was new. We still have it (130K miles).

Update on the truck- it's gone now. After a tree fell on it in the 2004 hurricanes, it still was functioning (it still ran!), but too many small things were going wrong. I hope it has a good new home, as it was a good truck. 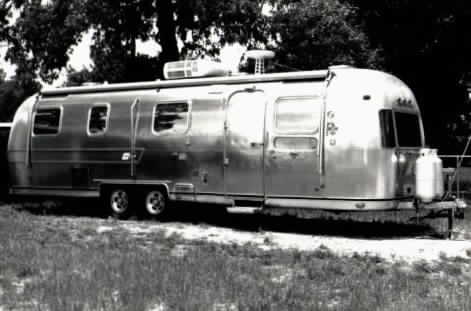 Same trailer- 1975 Airstream 31' center bath. At this point, we had towed this trailer around 400,000 miles.
I don't believe that any conventional trailer would have lasted this well 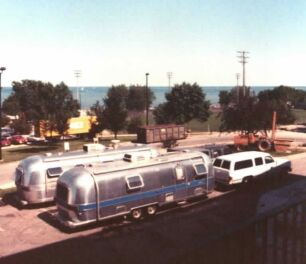 Our friends '77 31' Excella 500 in the foreground- we're in the background- Green Bay, Wisconsin. 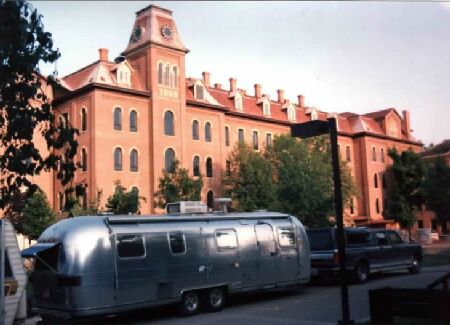 At a college in Minnesota- argh- can't remember the name or town, but a beautiful campus. 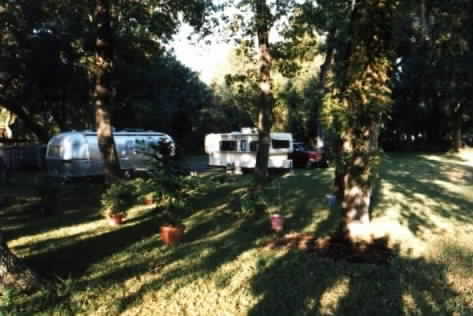 A somewhat fuzzy picture of our present Airstream- a '78 28' rear bath, double bed, side couch in the living room. To the right is my parents HiLo trailer- unique in it's own way like an Airstream.

Unlike our last trailer- we have towed this one a total of about 200 feet! In 1996, the store we had been renting since '92 was sold...but we had been wanting to move anyway- so we got busy looking for commercial property where we could work *and* live.
After suffering severe sticker shock at the price of commercial property, we found this place- a dump!- but.. it has two acres on a highway, and the wreck of a house is "grand fathered" in for retail sales and service- plus it has over 100 trees, over 30 of which are fully mature live oaks... and we could afford it- but...

The house was unlivable, plus needed an entire new roof- so to save time (plus we had a cash in hand buyer for our old place)- we bought this Airstream from a customer who was selling it at our place- moved it to the back yard, and set up house keeping.

I do feel sorry for the trailer, though- as we do not have time to ever actually use it- we were planning on selling it, but became too attached ;-) 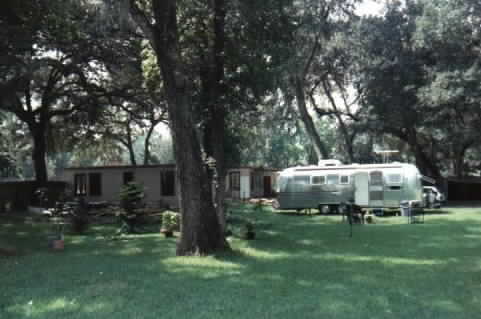 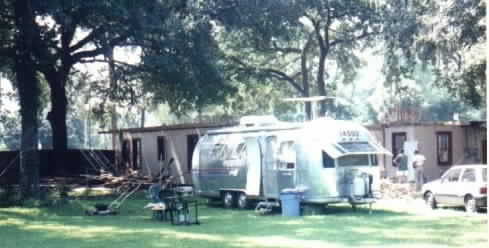 Two pictures with the very much under demolition and construction house in the back ground- the roof- everything above the cement block walls- has been removed, and framing has started.
A funny aside about the house- built in 1951 by a man who developed the neighborhood, it was the "showplace"- but... the property was full of "cabbage palms"- not one to waste anything, he hired a person to cut and make beams out of the trees.
The entire wood frame of the interior and roof was cabbage palm- not a real wood- ah well...

* Inland RV- A long time source for vintage Airstream parts- they have parts nobody else does.

* The Avion Guy- a new website- very well done, with information on the Airstream "first cousin"- the Avion.